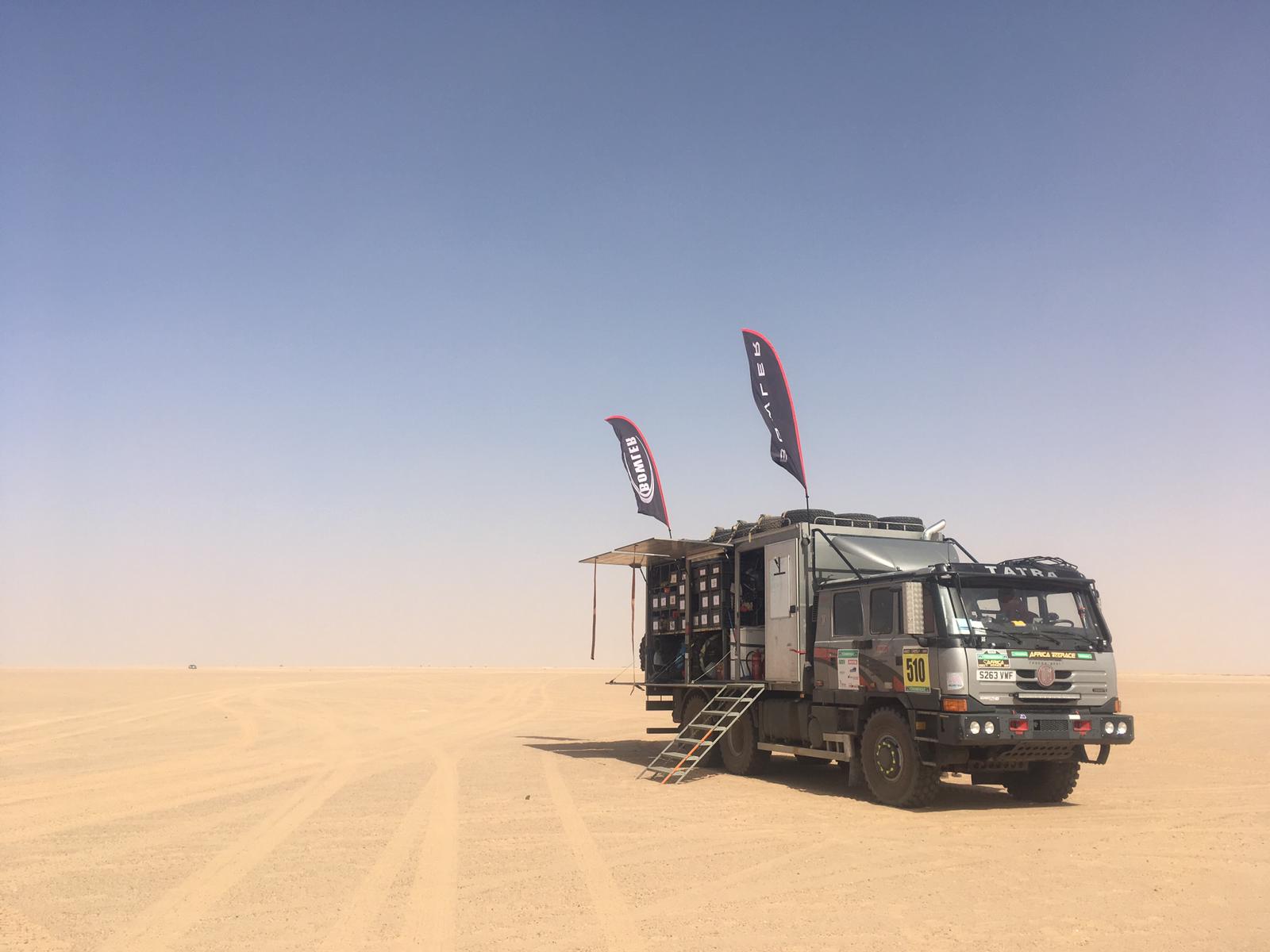 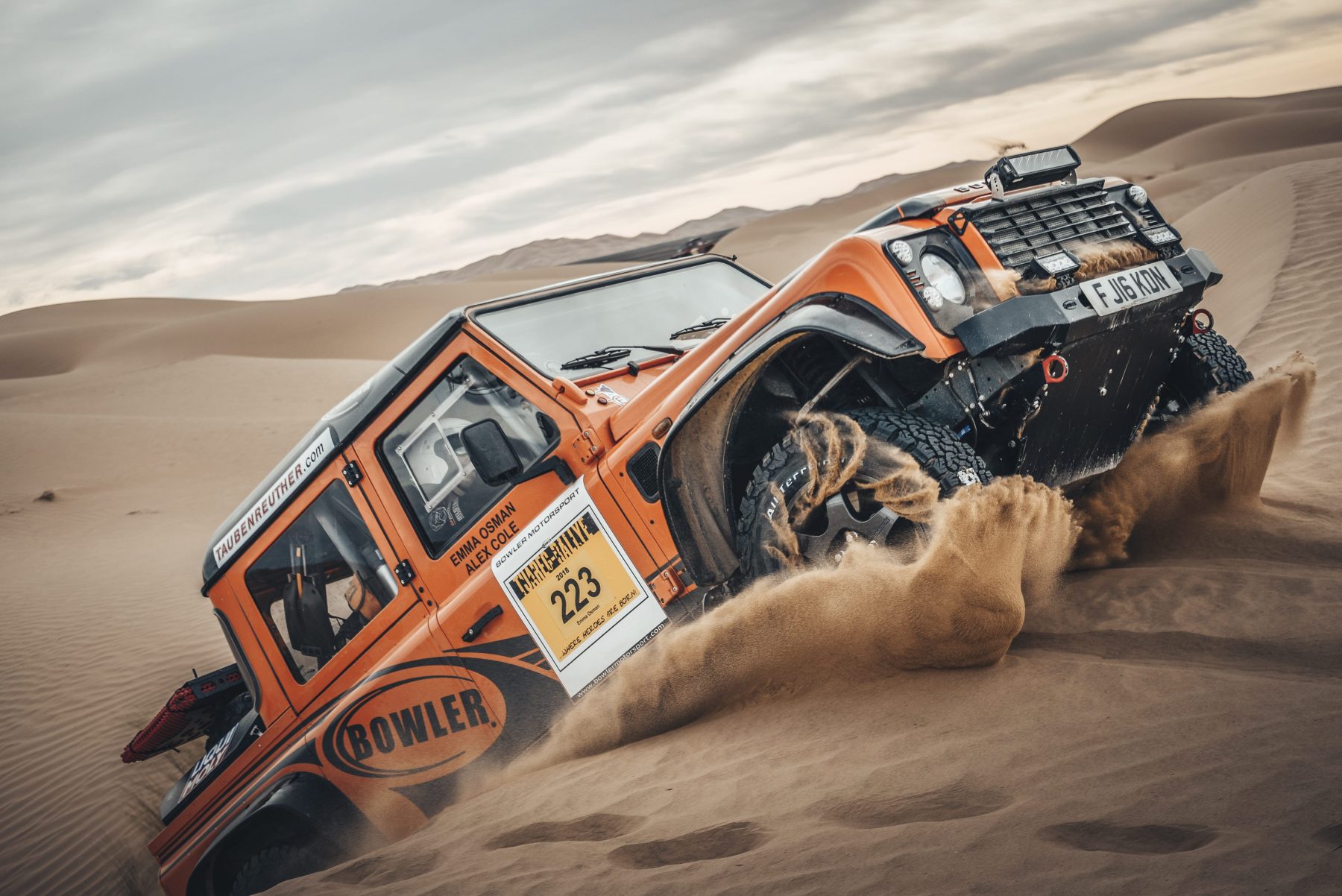 Bowler is delighted to have opened its 2018 racing campaign with a stunning 1-2 finish at the Tuareg Rally and only narrowly missing out on a podium clean sweep, with Bowler’s two further Factory team entrants completing the race in fourth and eighth places. The team and the Bulldog cars further showed their impressive racing credentials by winning five of the seven stages.

Bowler’s four customer supported Bulldogs set off from Midelt in Morocco on Saturday 3 March for the week long feat of endurance across seven challenging stages. With a new format for 2018, the Bulldogs and their driver/navigator pairings covered 2400km to include two desert bivouacs. The route for each day took in up to 400km, 95% being off road, and crossed three impressive canyons, the Atlas Mountains and a vista of sand dunes.

It was the driver/navigator pairings of Alex Cole/Emma Osman and Liam Griffin/Chris Geldard who took the first two steps of the podium with times of 39h:50m:54s and 48h:15m:28s respectively. Whilst Alex is a more experienced extreme off-road competitor, Liam’s racing achievements to date have been on circuit, so this was his first competitive race in sand. Andrew Wicklow/Simon Armstrong were pipped to third and Greg Mcleod/Craig Bounds showed solid pace until a crash forced an eighth placed finish overall.

With cars and their service crews being out of contact as the drivers tackle the challenging stages, Rally Raid events are a true test of (wo)man and machine and there’s no doubt all four Bowler crew pairings and the Bulldog stood up to the test.

The Bowler Bulldog is the first of the marque’s cars to be based on the company’s patented Cross Sector Platform (CSP), the visionary next generation vehicle platform conceived by founder Drew Bowler before his sad and sudden passing in November 2016. The CSP is a multi-use versatile and agile rolling chassis which can be utilised for a range of vehicle applications including on and off road, emergency response, security and protection, sport and recreation, land and estates management, humanitarian, filming, utility, exploration and more.

The superb results achieved at the Tuareg Rally demonstrate the impressive performance, capability and reliability of the 2018 Bowler Bulldog and mark the company’s continuation of Drew’s legacy in designing, developing and producing competitive vehicles for off road racing on the world stage, as well as the development of stylish road going versions of the same.

The road version of the Bulldog is an evolution of the race car, sporting the acclaimed Land Rover Mono-turbo V6 diesel and Supercharged V6 petrol powertrains and suspension. A Supercharged V8 version will also be available from June, making the Bulldog an even more exiting performance 4×4.

Richard Hayward, Director of Bowler commented, “The whole team, both at the race and in the factory, has again demonstrated the true Bowler spirit to ensure the Bulldogs were built and prepped to perfection and, in achieving a superb result for Bowler and our customer driver/navigator competitors. The Bulldog and the Cross Sector Platform chassis have proven to be incredibly robust, reliable and agile off road, easier on the drivers and equally competent and quick on gravel and in the sand, which is reflected in the results. The Bulldog is an impressive race and road car and we’re delighted to be adding a V8 version to the line-up.”

The Bowler Factory racing service team will be supporting competitors in a further four international Rally Raid events this year including the Morocco Desert Challenge (April), Baja Aragon (July) and Rallye du Maroc (October), culminating with the Africa Eco Race from Monte Carlo to Dakar at the end of the year. Bowler will also be supporting the British Hill Rally series in Wales (July) and Scotland (date TBC) this year.

With extensive expertise gained over three decades in extreme off road racing, Bowler offers Driver Training as well as ‘Arrive & Drive’ packages for those who would like to compete in a Rally Raid event, but prefer not to purchase a car of their own. Competing with Bowler as part of the Factory team, be it as an owner driver or Arrive & Drive entrant, provides the best opportunity to fulfil your off road adventure ambitions and reach the finish safely with the best experience possible.

To find out more about Bowler, its Bulldog race and road cars, innovative new Cross Sector Platform or range of racing services, conversions and accessories, explore the pages or this website or call us on +44 (0)1773 824111.